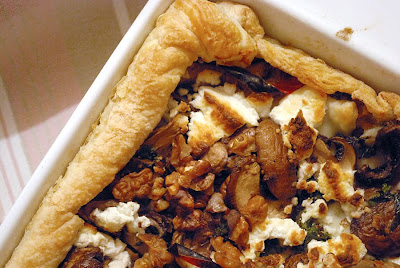 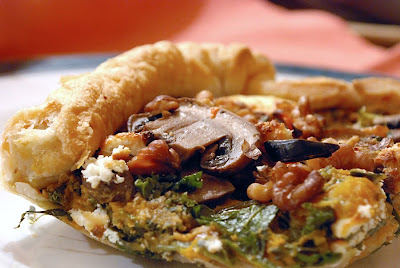 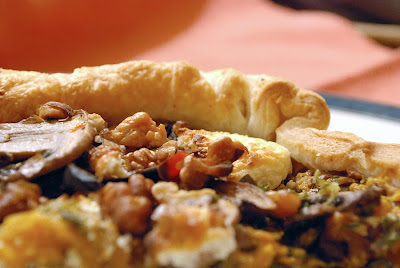 Preheat your oven to 180c and roast the Squash, which was mixed with the ground cinionmoninim, and on the same tray roast the sweet spuds which have been mixed with cayenne pepper and paprika. Add some whole cloves of garlic too. Give them all a good season and a drizzle with some oil. Rub the spices into them and the roast until cooked. The sweet spuds will prob cook a bit quicker. Remove when cooked and blitz.

At the same time, roast your walnuts for about 10mins. Remove and set aside.

Mix the spinach, kale, half of the walnuts, slightly crushed and some of the goats cheese together with the pureed veg. Taste and season if needed.

Next, roll out your pastry to fit your dish. Line the bottom with the roast veg mix, followed by a layer of mushrooms. Top with the rest of the goats cheese and bake at 180c until brown gooey and golden. About 10 before the end add the rest of the walnuts. It's nice to add some sliced chili also.